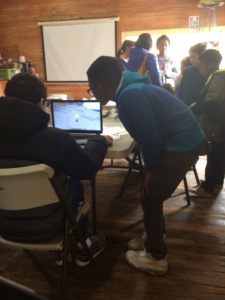 A few weeks ago, I nervously shared my TBP’s experience with a private Minecraft modding class.

Although the Internet was slow, the other participants were very new to modding, and the teachers didn’t allow any Minecraft play, we were somehow able to convince him to return.

Apparently we weren’t the only ones upset with the Internet speed. The teachers postponed the next class so the issues could be addressed.

Now, not only was he hesitant to give it another shot, we had to skip a week. This could have been the kiss of death but…I actually think it helped.

Because the class skipped a week, students were told that they could move along with the planned lessons. My TBP did that-others did not.

Now this sprint forward could have gone two ways. One, cause a bigger problem since he’s now waiting for others to catch up or two, continue to progress at his own comfortable pace.

We knew by the activity to the site that another person was right behind him in completing lessons. He was proud to learn today that the teacher was that user sign in.

Thankfully, he was allowed to move ahead, get his specific questions answered, and was intrigued when they hinted that they’d only scratched the surface and there was more to come.

During class, he was asked to help other  students. While I don’t think that should always be the point of his instruction, for my highly-introverted kid-it was good practice in a fairly comfortable environment.

After class, he admitted that he was proud of himself and he wanted to go back.

This, is a very good thing!

2 thoughts on “Shift in Thinking”