A few weeks back, we visited Dr. Steven Curtis. Dr. Curtis suggested that my TBP needs to excel in more areas than video games.  I received great comments and suggestions from helpful readers and I put a new plan into place.

At this point, I spoke up and said, “What I’m thinking about is someone who enjoys many different things.  For example, I enjoy writing, teaching, reading, and playing the piano.”  His face told me that he was not happy or comfortable with the news.

The next morning, I showed him the list for the day, it consisted of a mixture of chores and activities that he often enjoyed when he was taking a computer break.  In order to earn computer time, there were several things that I wanted him to do.  The more items he did on the list, the more time he could earn.  Initially, there was some push back about this because, “we haven’t done it this way” and I pushed back, standing my ground.

The one thing on the list that he really challenged was piano practice.  My TBP wanted to go round and round about piano and I didn’t engage with him.  Instead, I explained that this was today’s list.

He put his laundry away, read with me and completed some math that I selected.  This earned him a computer break and by then, I needed one too.  Eventually I know that he will manage his own responsibilities, but as a wise friend suggested…I was helping him break the lessons into smaller parts.

As the afternoon progressed, he tried to return to the more relaxed approach that he liked.  I explained, “When you…You will earn more time.”

Drawing, cursive and exercise were crossed off the list and then more piano arguing.  Finally, we tackled the piano practice on the list. I thought once he was done, he would say, “Oh, I remember doing this” or “That was a little bit fun.”  Instead, he said that playing the piano made his stomach hurt and he hated it.

With this response, I found myself questioning my decision.  After a long debate, we came up with a compromise that seemed to be a win-win situation.  He had shown interest in fencing, but was very apprehensive to sign up for the class.  In order to ease some of his concerns, we arranged to observe a class.  Because of this, we agreed that if he wanted to take some fencing lessons, we would put piano on the back burner for a while.

When I really think about it, it isn’t that I want him to do something that he has no interest in.  I want him to have enough time to make an educated decision and to find activities that he can practice and feel good about his achievements.  I truly don’t care if it is piano, writing, art or fencing….just something!  If I’m being totally honest, it is easier for me to just let my son play video games, especially when I am trying to get work done.  However, I know this only helps me for a short time and it makes it more challenging for my son in the long run.

How do you help your child develop a wider range of interests?  Do you “force” sports or music lessons?  I would love to hear your thoughts! 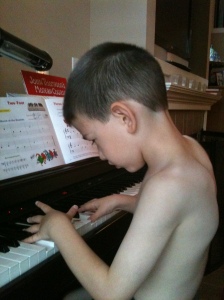 When he was curious in playing & writing his own songs